The “Paradise Born of Fire” candle was inspired by the Summer 2018 Kilauea volcanic eruption in Lower Puna, Big Island, Hawaii. Kilauea is the most active shield volcano in the world and at the time was continuously erupting since January 3, 1983.

I had lived in Kapoho, Big Island between November 2015 to the time of the eruption. Before that, viewing lava would have always been from a safe distance while seeing the lava flow down the hill from Pu’u O’o on the far side of Kalapana. During my time in Kapoho, I would tell many of the Airbnb visitors I hosted to check out the lava close-up. The flow would ooze slowly and it’s always fascinating to watch the newest land in the world be taking shape. I’d tell them the history of Kapoho and how the last eruption that buried the town was back in 1960 and that it would be a “long time” before another eruption would come.

Little did I know that around the first week of May 2018 – Lower Puna and all the residents living there would have their world interrupted by mother nature, or namely Pele, the Hawaiian volcano goddess of fire that’s in many of the Native Hawaiian legends and lore.

I just happened to have gone up to Volcanoes National Park during the last week of April to stare in awe at the caldera, filled to the brim, bubbling with red/orange hot lava. I didn’t think much of it and continued onwards during my first week of May to start on my 4 month round the world trip journey.

Then came the strong 7.0 earthquake that shook Lower Puna and I got many messages from friends that fissures were opening up in Leilani Estates, a neighborhood that became the epicenter of the Summer 2018 eruptions. Being that I was in the Philippines, I felt helpless watching the each new fissure open up and down along the rift zone fault (the fault line that crosses diagonally from the main caldera towards the southeast point of Big Island).

(Red circle is where I lived in Kapoho, Big Island). Fissure 8 lava flow surrounds the east side as that flow eventually buries the rest of Kapoho town below)

After many fissures later, Fissure 8 would be the most dramatic of them all. Lava from this fissure eventually would be the one that buried Kapoho and the beloved Kapoho Tide Pools (the best snorkeling and coral reef across all of Hawaii, in my personal opinion). One of my best friends who was house sitting was able grab my precious art supplies and some belongings and haul them off safely into Hilo town in my car. Eventually, the Fissure 8 lava cut off access to the home I was staying and would stay that way for another year.

After finishing my 4 month trip, I returned around the middle of August 2018 to be able to see the last of Pele’s Fissure 8 glow at night – and then a week later – the eruption paused and stopped.

While everyone else who was physically there had 4 months of time to process the trauma – I felt like I was coming back to a different world, not knowing where I’d live, what I’d be doing. The Lower Puna I know was dramatically changed, forever. 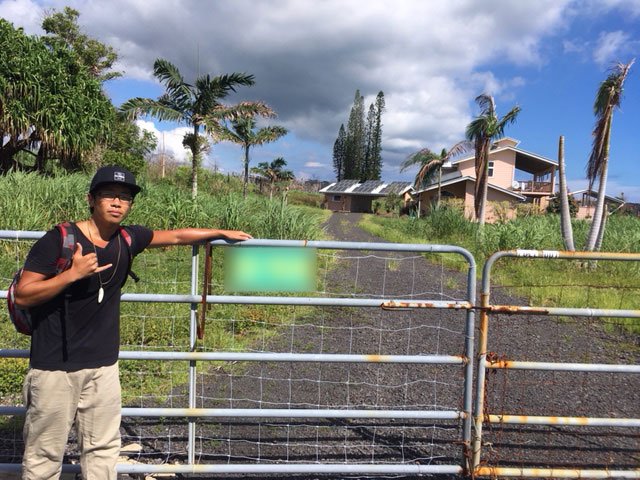 (When it was safer to hike back in – I needed to see what the place looked like. The lava ended up sparing the home)

I thought I’d get over it, but it took my many months to process the fallout from this natural event. I truly attribute the eruption/Pele for basically kicking me out – but in the sense, making me rethink my life and challenge myself to try something new in life.

Faster forward to end of 2019 into the beginning of 2020 – I’d still be able to live in Hawaii, but now in Honolulu, Oahu – working with Hawaiian Airlines as their Content Management System, Specialist. And while COVID-19 would be a new beast, that timeframe eventually led me to experiment making candles with crystals and to the manifestation and creation of Mind Mana Creations. My candle creations may never have happened if the Summer 2018 eruptions never happened.

While at the time, I felt angry and upset by the situation, I look back connecting the dots realizing it was a necessary part of growing up to get me to where I’m at. 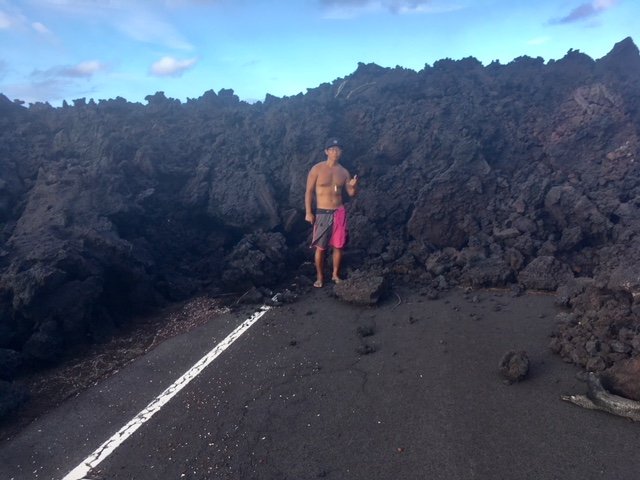 (From video clips, lava flows look like they are flat – but when you stand next to one – the height of these lava flows can be anywhere from 10 to 30 feet high!!)

The Paradise Born of Fire candle is scented with Fire and Tonka and colored with red soy wax, representing the lava. The candle is also infused with Black Obsidian (the volcanic crystal that reminds me of the smooth surfaces of Pahoehoe) and Turquoise (represents the green ferns/plants that grow on lava’s new land) crystal chips. View the candle here. 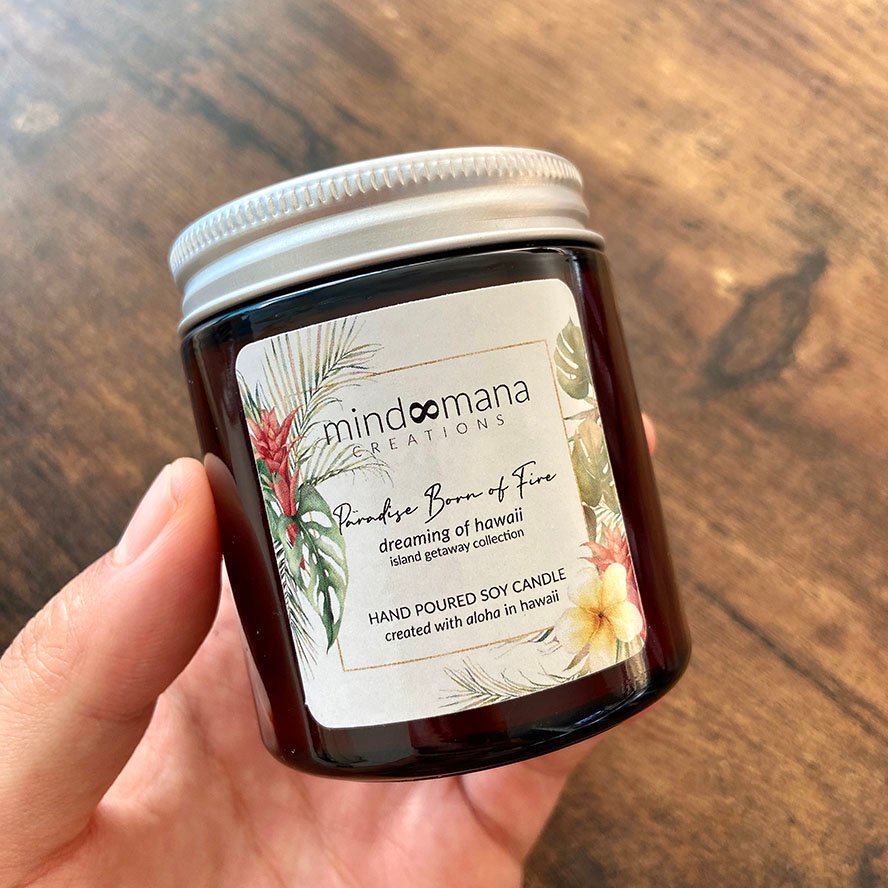 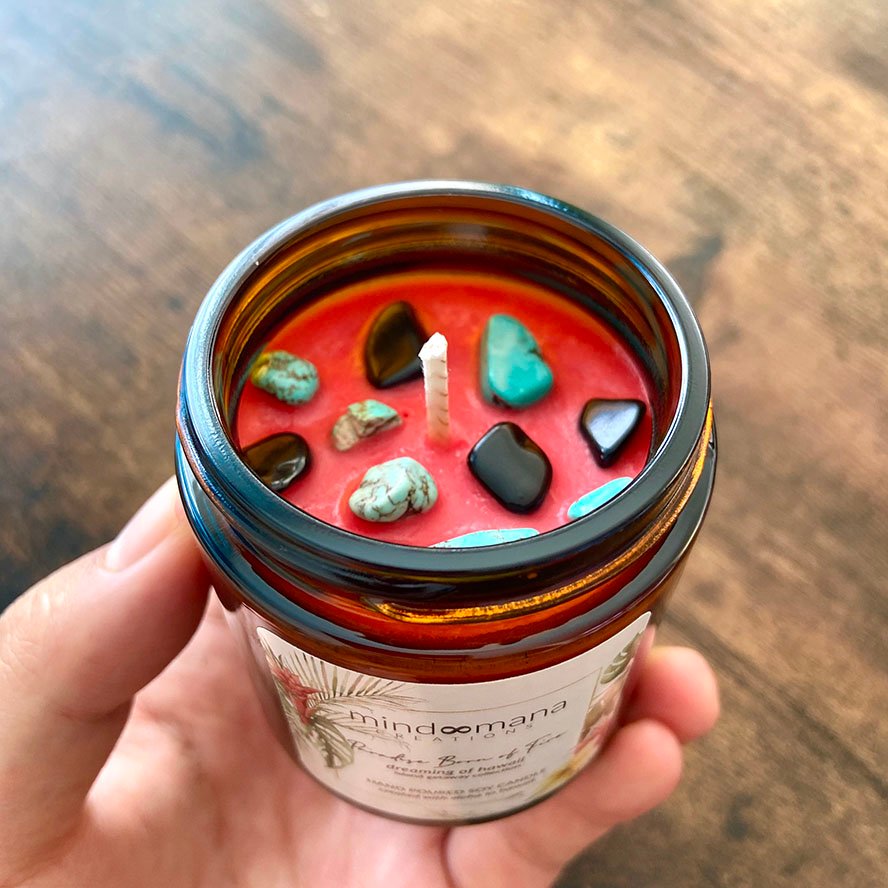 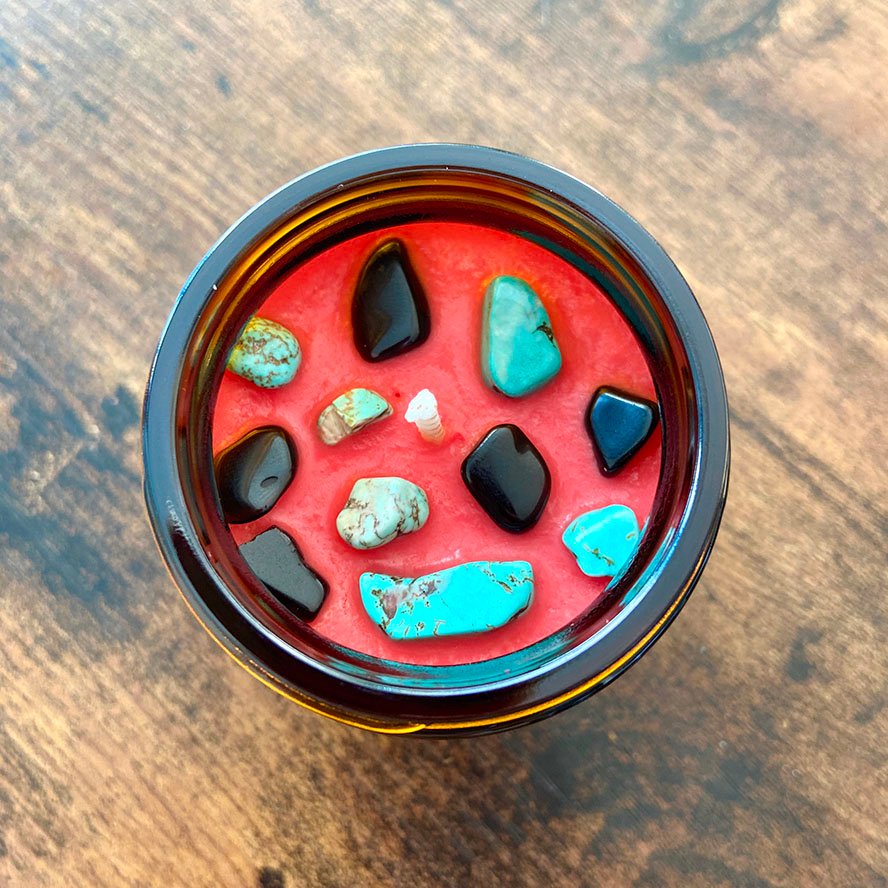